Fly – the power of a three letter word:

I don’t know if your phone, like mine, beeps at eight o’clock every weekday morning to announce the arrival of a ‘Daily Tickler’ from intime PROFIT – if not, you should make sure it does.

Firstly because they’re regular as prunes and porridge and set the pace for the day. Mainly though, because they offer those occasional flashes of amazing inspiration.

Yesterday the quote was: Fly.

Guillaume Apollinaire was the French poet, writer and art critic whose words this Daily Tickler recounted.

As the managing owner of a small business helping like-minded managing owners of small / medium businesses this struck a chord – sometimes subtlety suits the hand-holding management and business development style but often you need to be pushed over the edge … step out of your comfort zone, jump over the edge and see if you fly too.

Thanks to Mr Wiki I discovered that Guillaume Apollinaire was born 26th August 1880 and died 9th November 1918 and is considered one of the most important literary figures of the early twentieth century. His brief career influenced the development of such artistic movements as Futurism, Cubism, Dadaism, and Surrealism and the legend of his personality - bohemian artist, raconteur, gourmand, soldier - became the model for avant-garde deportment. 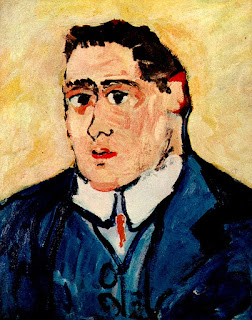 A portrait of Guillaume Apollinaire by Maurice de Vlaminck.
Vlaminck's compositions show familiarity with the Impressionists, several of whom had painted in the same area in the 1870s and 1880s. After visiting a van Gogh exhibition, Vlaminck declared that he "loved van Gogh that day more than my own father".

Well, I’ve been a soldier and my girth betrays 'mes passions gourmandise' but I covet the man, the life, the environment and the skill.

I had to look further and found this:

“…geometry is to the plastic arts what
grammar is to the art of the writer.”

As you know, words are my tool and making them work harder for businesses is my service. So often overlooked - the structure of a web page, brochure or advertisement is as important as the structure of the written message – not just the physical structure but the geometry of the message that the words impart.

I was working with a client recently to help structure some key elements of his corporate message. It wasn’t working. The message was there but tripped over itself as one read the words … and, hello … words are there to be read. And, readers read aloud, even in their heads. So, if the message can’t be read aloud, with ease – it just won’t work.

To make this client understand, the revelation was the introduction of a metronome.

The rhythm was given, the structure was set and the words began dancing to the corporate tune.

If you want your corporate message to fly,
step over the edge.

To get your own Daily Ticklers email intime@intimeprofit.com and ask for your 8 o'clock wake up beep. 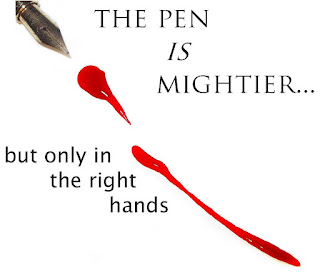 Posted by Rodney Bashford at 03:12 No comments:

Every business starts a New Year with good intentions, fresh thoughts and a magic dust to sprinkle over colleagues, staff, clients and prospects.

I’ve been participating in a series of business development seminars with colleagues running SMEs in (see: http://www.intimeprofit.blogspot.co.uk/). One of the recent exercises that caused much furrowing of brow was for each of us to refine our ‘elevator pitches’. The clash of benefits prevailing over values threw all into disarray as we tried to think on the part of our clients and customers, considering their views and needs as opposed to our intentions.

All positive stuff - as indeed are the benefits, thought provocation and pearls of wisdom derived from each monthly gathering.

So here we find ourselves starting yet another New Year with yet more fresh and invigorating ideas to carry us towards Easter.

How are we applying these sparks and how are we articulating our inspiration to others – staff and clients alike.

How fresh is your website – not the expensive side of its structure and functionality but the simple side of its message – THE WORDS … is it still singing from the same business hymn sheet?

So often the answer is NO.

The same goes for the packaging of your key and unique selling points; your standard mailings and responses to inbound enquiries … are your clients and prospective clients hearing (reading) the story as you wish to tell it now, today, in 2013?

Put us to the test by meeting; you talk, we’ll listen and leave you; then we’ll give you a written assessment of your written presentation, your verbal summary and how we might re-articulate the proposition to fit your New Year glitter and goals.

This will cost you nothing and – you don’t have to do anything with the thoughts we then share.

But you never know … you just might use ASPIRUS to make accost effective difference to your business – now.

Posted by Rodney Bashford at 05:34 No comments: